First-time mum Naomi and Steve are the most lovely, chilled couple you could meet, so I knew their birth would go brilliantly. Naomi came to my pregnancy yoga classes throughout her pregnancy and she and Steve did a group hypnobirthing course with me – and together they committed to the techniques at home. I’m pleased to say that a bit of birth preparation, plus a relaxed couple, equals a fantastic birth.

Naomi’s birth in the pool

I thought I would share my birth story with you and hopefully give some reassurance to your lovely pregnant ladies during these challenging times. In the weeks leading up to the birth of our little one, I was a bit worried about how things would pan out but I can honestly say I had the most amazing birth experience and everyone at Stoke Mandeville was incredible! I hope this will give some confidence to you all despite Covid-19!

My due date was the 13th April and I had convinced myself that there was no way that baby was going to arrive anywhere near this date. So the morning of the 13th came and I had a few twinges but ignored them and we went out for a nice walk with the dog and when I got back I did loads of batch cooking for the freezer. At around lunch time I had what felt like period pain but I still convinced myself it was nothing to worry about and just carried on going about my day.

Then a few hours later I started losing my mucus plug, so told Steve and we tried really hard to not get too excited. We double checked the hospital bag and then for the next few hours I sat on my birthing ball and watched some comedy on telly. I was then getting mild surges throughout the afternoon and I timed them on the Freya app. They were slowly getting more intense and then at around 8pm I had been getting around 3 surges of a minute long in every 10 minutes.

I called the hospital and let them know, as I was explaining my surges slowed right down and they suggested I stay at home longer. I did explain I’d been timing them for a few hours and they suggested I stop timing them to take the pressure off a bit. I had a bath but didn’t like lying on my back, so went back to the ball and had something to eat.

Steve was great at this point because I just wanted to go to hospital but he said go upstairs and try and get some sleep. He put some of my room spray in the room and lit my candles so I could relax. My surges intensified at around half 11 so we called the hospital and they suggested I come into the birth centre to be checked over – though they didn’t sound convinced I was ready yet. We arrived at around 12.30 and they checked me. I was 4cm dilated at this point and my surges were really intense.

I went straight into my birthing room and they filled the birthing pool – I was sick quite a few times at this point with each surge, but they gave me an injection which quickly stopped this. Steve set up the room with candles, room spray and my playlist, so I was nice and relaxed. I got into the pool at around 1am and it was amazing – an instant release from all the pressure and I continued breathing through my surges.

The midwife was fantastic and completely adhered to my plan – I had no other internal examinations and she didn’t really interfere as I didn’t want coaching through any of it. I just wanted Steve to help me and she would keep an eye on baby’s heartbeat.

When my waters broke in the pool, I was so relieved, as I felt like things were now happening. The midwives changed briefly at 3.30am so that my lady could have a break and the next midwife was just as great. She reassured me that everything was going well and at this point I went onto gas and air, as the intensity of the surges was really powerful. She left the room and the other midwife came back in at around 4.30am, I was getting really tired and started asking about pain relief options and wanting a caesarean (I was being a bit dramatic).

I then felt the need to push really hard and the midwife actually questioned it, suggesting that I try to breathe instead. I used the gas and air and was sick again. I leant back and Steve noticed the baby was coming. Two or three big pushes and our perfect little boy, Finlay arrived at 5am, on the 14th April, weighing 7lbs 11. We did skin to skin for an hour in the pool and waited until the cord had stopped pulsing before Steve cut it and he also had skin to skin whilst I was getting out of the pool. I had some tearing and in hindsight I think this was because Fin came flying out.

The whole experience was so incredibly amazing. I could cry now just writing about it – it’s honestly the biggest achievement of my life and I wouldn’t have changed any of it. We had a total of 4 hours in the birthing room and we were discharged that afternoon.

Fin is absolutely gorgeous and has been so chilled out since we bought him home. I am also breastfeeding which I never thought I’d be able to do! I can’t thank you enough Donna because the pregnancy yoga kept me so calm in the lead up to the birth and the hypnobirthing course has been invaluable – I honestly can’t recommend it enough! Having Steve play such an active role in the birth was so important for me – I couldn’t have done it without him and his reassurance throughout it all.

Thank you again and I can’t wait to see you and the other mums for more yoga on the other side of this. 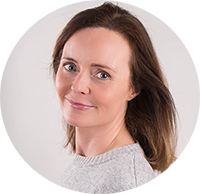